Posted on October 4, 2017 | Comments Off on Organic soy: A great and effective way to reduce breast cancer recurrence 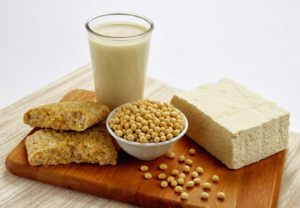 For a long time, women have been advised that soy products may increase the risk or recurrence of cancer. The evidence for this was solely based on in-vitro studies using a rat model, and it is now known that soy isoflavone metabolism is very different in humans. Recent epidemiological research suggests that soy protein consumption is linked with a reduced risk of breast cancer recurrence, and even all-cause mortality in multiple cohort studies (1,2,3,4,5).

Isoflavones are the specific type of phytoestrogens found in soy that play a role in modulating estrogen levels in the body. When estrogen levels are high, isoflavones bring them down and vice versa, thereby acting as a buffer. Isoflavones are associated with protecting against and fighting cancer by inducing cancer cell death and preventing cancer cells from multiplying (1).
Soy has the highest amount of isoflavone content, however other foods such as legumes, coffee, tea, nuts and grains also contain some amount of isoflavones1. However, a plant-based diet rich in various phytochemicals in general is the best way to reduce the risk of cancer, along with increased exercise.

Recent studies show that a linear trend exists between soy protein consumption and associated benefits on breast cancer prognosis, reducing the risk of recurrence as much as 35 to 60%1. The upper level of benefit was around 10 to 15 grams of soy per day, translating to about ½ cup of soy milk per day. Additionally, soy did not interfere with the effects of tamoxifen, and some women experienced additive benefits when taking both (4,6).

A lower breast cancer incidence in Asian countries correlates with the higher soy intake compared to Western countries (1). Interestingly, Japanese adopting a Western diet is related to a higher incidence of breast cancer (1). However the benefits of soy protein consumption on breast cancer were true for both Chinese and U.S. populations, therefore regardless of ethnicity (3).