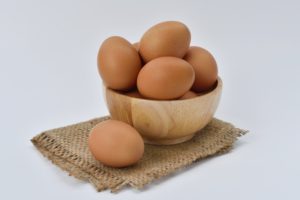 Most people who are concerned about cardiovascular health and cholesterol have been told or have chosen to avoid eating eggs.  However a closer look at older and most recent research shows that eggs can actually be beneficial.
The notion that eggs pose a risk to cardiovascular health was developed in the 1950s, when high serum cholesterol was recognized as a risk factor for heart disease (but before the differences between good and bad cholesterol were delineated). Since egg yolks are naturally high in cholesterol, avoiding them was thought to make sense to protect against high cholesterol and heart disease. But most of the research has not confirmed an association between consumption of eggs and increased risk of heart disease. Lemos et al. (2018) reasoned that cholesterol from eggs controls the production of cholesterol in the body, but in such a way that does not increase “bad” cholesterol, and maintains the LDL:HDL ratio.

A recent study done by Qin et al. (2018) has assessed 461, 213 healthy people aged 30-79 for 4 years. They were asked through questionnaires including how many eggs they ate, and were monitored for incidence and mortality from cardiovascular disease (CVD), ischemic heart disease, hemorrhagic stroke, ischemic stroke, myocardial ischemic events, and nonfatal myocardial infarction. The conclusion was an inverse association between egg consumption and cardiovascular disease: 1 egg per week was linked with an 8% decrease in risk for hemorrhagic stroke, CVD, and death from hemorrhagic stroke. Eating eggs every day was associated with an 18% reduced risk of CVD and 28% reduced risk of death from stroke, compared with not eating eggs at all. Other studies also confirm this benefit – the 2003 Life Span Study in Japan concluded that people who consumed eggs daily had a 30% lower risk of stroke death, compared with those who rarely ate eggs (2). Rong et al. (2013) have also reported that higher egg consumption was linked to a 25% decreased risk of developing hemorrhagic stroke, and that there was no evidence of eggs being associated with an increased risk of coronary heart disease or stroke. The only but an important exception to these studies were diabetic (type II) patients, who were consistently reported to be at a greater risk of CVD with higher egg consumption (3,4).